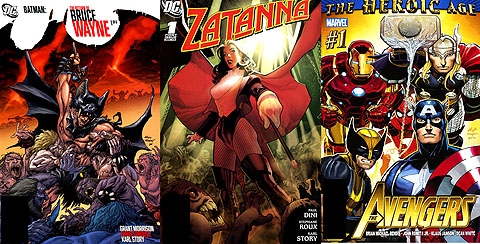 Alex and John have a heart-to-heart talk about Batman: Return of Bruce Wayne #1, Zatanna #1, and Avengers #1!  After a round of quickshots, the boys talk about Megan Fox’s recent TF3 upset.  Lastly, John asks Alex who he would like to meet at a comic con if deceased creators could somehow be given black lantern rings.

Welcome to a very special edition of Prejudged! This week sees a plethora of new #1 issues from the Big Two, and I thought this would be a great opportunity to get people to jump onto a new book. This edition of Prejudged! is very “NEW READER FRIENDLY”. Let’s kick off with a look at the return of Legion Vet Paul Levitz.

Anyone who’s ever been interested in diving into the 31st century and joining the Legion of Super-Heroes in their adventures across the future of the DC Universe will want to jump straight onto this new #1 from legendary Legion squire, Paul Levitz. Coming off the heels of Action Comics: Superman and the Legion of Super-Heroes and Final Crisis: Legion of 3 Worlds, we see the return of the original, post-Infinite Crisis Legion of Super-Heroes team in full form. The Legion is one of the very first super-hero teams in comic book history and the first to ever tackle themes of racism and homosexuality. This series also has a Green Lantern Corps second feature. If you have room for another team book on your pull list, I highly recommend picking up this title.

Marvel’s Rat Pack is back! The Agents of Atlas, a ragtag team of a spy, a spaceman, a siren, a killer robot, a mermaid, and a gorilla-man, has to be the strangest team in the Marvel Universe. When Jimmy Woo discovered that he was the heir to Genghis Khan and a powerful secret criminal organization called the Atlas Foundation, he saw to achieve the foundation’s goals through more passive means while still maintaing his cover. With the guidance of his advisor dragon, Mr. Lao, Woo travels the globe in search of adventure. This title is definitely for comic book readers who are looking for something different, and you don’t get any more different than Atlas.

The backwards-talking, Mistress of Magic finally lands her own ongoing series. Brought to us by Batman: The Animated Series producer and writer, Paul Dini, this new series sees the many magical hijinks of everyone’s favorite fishnet stocking wearing heroine. (Okay, maybe it’s a tie between Zatanna and Black Canary.) Personally, the biggest draw of this book is the wonderful art of Stephanie Roux. With Amanda Conner leaving Power Girl, it’s good to see Roux on art duties for another of DC’s most beloved female heroes. Trust me, the artwork alone is reason enough to pick this up.

I’ll leave this to the solicitation:

THE HEROIC AGE IS HERE! There came a day! A day unlike any other…where two of Marvel’s top creators teamed up for the very first time to create a bombastic new monthly Marvel comic that not only ushers in the Heroic Age of Marvel Comics but unleashes onto the world the most blockbuster Avengers team ever! Who will answer the call? And will they assemble just in time…because Kang the Conqueror is here from the future. And wait till you find out why…! Bonus back up feature: the oral history of the Avengers, part one. A brand new illustrated look at the Avengers in a way you have never seen before by series writer Brian Michael Bendis.

Come back next week for another bombastic edition of Prejudged!

It’s the first official episode of the year, and EJ, Alex, and John are back with a jam-packed episode showcasing Invincible Iron Man #9, Hellboy: The Wild Hunt #2, and Detective Hush Comics #852!  The boys then hit you in the face with a round of quick shots, some Iron Man 2 news, and their opinions on the Transformers 2 teaser image.  The show is rounded out with a couple of listener questions from the TK site.