DISCUSSION: Which of the six Infinity Gems would you like to own? 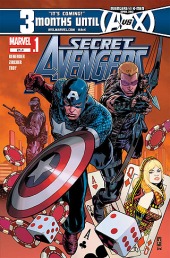 After a round of quick shots, the boys talk about the new DC logo, Rob Leifeld, and the possibility of a line-wide Marvel reboot.

The gang’s all here! EJ, Alex, Migs and John coalesce into one new TK entity with no pants but more lines on their costume and review Uncanny X-Force #14, Flashpoint #5, and Justice League #1!  That’s right, the new DC Universe starts here! 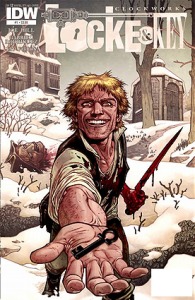 John and Migs review Amazing Spider-Man #666, Locke and Key: Clockworks #1, and Uncanny X-Force #12!  The boys then replace a round of quick shots with some top news items to come out of San Diego.  To wrap things up, they discuss Frank Darabont’s recently announced departure from the hit TV-series The Walking Dead.

Here’s a question — What has two thumbs, an insatiable appetite for human body parts, and a sleek black spandex suit with tendrils? Awww, that’s right bitches Venom is back! After an almost six-year hiatus from solo books, Marvel has finally decided to bring back the only thing on Earth with a tongue longer than Gene Simmons. Venom # 1 however is not a  simple regurgitation of the Venom character that we’ve been seeing since it’s original appearance in The Amazing Spider-Man # 252 (January, 1984). Writer Rick Remender (Fear Agent) and artist Tony Moore (The Walking Dead) deliver the story of the newly-revamped Venom character in a way that comic book fans have never seen the character before.

If you missed The Amazing Spider-Man # 654.1 (most likely because it was part of Marvel’s completely inane Point-One campaign) then nuts to you because you missed a beautifully put together origin story of the –SPOILER ALERT– Eugene “Flash” Thompson Venom incarnation. Wait, what? Flash Thompson? Venom? Isn’t Flash that dude in the wheelchair that used to pick on Peter Parker in high school? Eat it sucker, that’s what you get for judging Marvel for their dumb ass marketing campaigns… the nerve. Anywho, it doesn’t make any difference I suppose because if you are lazy, like moi, you could have just as easily read the intro page to Venom # 1 to get the lowdown, but… what fun is that?

The new Venom series follows Flash, our beloved war-hero and poster boy for dudes in wheelchairs who still have amazing upper bodies as he engages on military-funded missions via the Venom symbiote. Referred to by some as the “Black-Ops Venom” this new incarnation lives up to it’s moniker in the first issue. Dropped into the fictitious eastern European country of  Nrovekistan (yeah I Google-mapped it. Big whoop, wanna fight about it?) the new Venom is tasked with capturing a scientist who has found a way to weaponize Antarctic Vibranium. Of course the scientist, in true evil genius fashion, is raging all over those poor Nrovekistanians with a vibranium tank and raising the kind of hell that only eastern European countries seem to catch in comic books. Just to make things interesting, Remender adds some dude named Jack-O-Lantern into the mix who is working at the behest of a mystery villain/arms dealer/staunch anarchist. But I digress, for surely that is a plot point that will play out in the first arcs of the new series.

The new Venom is interesting in a lot of different ways. First off, there is the military factor, which actually is not all that engaging except for the fact that they control how much time Flash is allowed to spend bonded with the symbiote. This is the coolest thing about the new Venom as it completely changes the dynamic that the previous Venoms all shared. In older incarnations, the symbiote has always (except in the case of Peter Parker) been willingly accepted by its host. With Flash however, the symbiote is more of a means-to-an-end, although surely the symbiote will play a part in this drama later in the book as foreshadowed by Remender. In lieu of this new dynamic, the first issue also introduces fans to Flash’s oft-forgotten bouts with alcoholism and bastardism, which is a made-up word that sounds more interesting than just calling him a “selfish jerk.”

Venom # 1 is definitely worth checking out for any fan of that dude, oh, what’s-his-name, Spider-Something, and of the older Venom books. The series feels fresh and is not, thank God in heaven, weighed down by the continuity of the previous Venom canons.  Marvel successfully revitalizes both the Venom and the Flash Thompson characters in this new series and more importantly have given it/him guns, which will forever make any character except for Batman ten-times cooler. The new Venom series is off to an exciting start and Venom # 1 a good first step in raising the character out of the B-list purgatory that it has been festering in since Eddie Brock stopped being interesting, which was back in the mid-90’s, just in case y’all didn’t know.

Alex and John meet up to talk about Ultimate Thor #1, Brightest Day #11, and Uncanny X-Force #1.  After a round of quick shots, special guest Jad joins John in a special segment where she recommends Runaways and Neonomicon to new readers.  At the tail end of the show, the boys share their thoughts about Zack Snyder being tapped to direct the next Superman film.

Welcome back to a new season of Prejudged! to go along with your new season of Tres Komikeros. This edition will feature Marvel’s rising stars in the writing department; Rick Remender, Jonathan Hickman, and Jason Aaron.

Introducing the new mutant black ops team of Wolverine, Archangel, Psylocke, Fantomex, and some other obscure character who rarely appears in a comic book… Dead-something… Remender takes a swing at the mutant world of the Marvel Universe along with long time collaborator, Jerome Opena. This team has tons of potential for greatness, with 2 viable funny men, and one really hot ninja. This is also one of those titles where you get to see Wolverine get his claws real dirty, and with Rick Remender on the wheel there’s little doubt about how much fun this new series can get. Plus, it’s good to be able to give that other character some time in the spotlight. What’s his name? Something-pool? Yeah.

Featuring the untold story of the beginnings of Ultimate Thor, Ultimate Loki, and the rest of Ultimate Asgard, this mini-series by rising star Jonathan Hickman and fan-favorite Carlos Pacheco should keep you occupied enough while you wait for the Thor movie to come out. There are tons of Thor titles to choose from now to help fill you in on everything you need to know about your favorite Norse God of Thunder, and in Hickman’s very capable hands, we should be in for a treat in this title. Also, between Pascal Ferry, Chris Samnee, and Carlos Pacheco, the God of Thunder’s universe looks as good as ever. It’s a good time to be Thor fan.

Wolverine goes to hell in one of the most interesting concepts for the character in the past few years. It’s easy to see that Jason Aaron is the best person to write Wolverine, and considering how many stories the character has been in throughout the years, Aaron has come up with inventive new situations and messes to throw Logan in, and this time sending him to the depths of hell the meet the masses of Hand ninjas and Hydra henchmen he’s gutted throughout his long lifetime. I’m sure you’re asking yourself why you never thought of that before too. Also, how awesome is that cover by Jae Lee?

Here we are, in another action-packed edition of the All-New, All-Powerful Prejudged!!! This is another huge week in comic books, with releases like Amazing Spider-Man, Green Lantern, Captain America, Batman, Dark Avengers, Daredevil, Power Girl, Deadpool, Incredible Hulk, and Uncanny X-Men.

This time though, we’ll be taking a look at covers to titles which I think should be getting more attention, in an attempt to make this already big week HUGE!!!

First on our list is Invincible #70: cover by Ryan Ottley

After years of build-up, the Sequid Invasion finally begins and Invincible and his fellow heroes seem outmatched and overwhelmed. How will they escape their doom?… Just a little old-school hyping up for ya. As always, Invincible promises to be a fun-filled thrill ride with lots of action, drama, and a whole lot of teen angst. This comic book has been as consistent as its Marvel counterpart, Ultimate Spider-Man, without stepping into “rip-off” territory. As a friend once said: “Invincible is good enough to make you pass on sex”…… There’s a comments section at the bottom of the page, by the way.

Next is Batman: Streets of Gotham #9; cover by Dustin Nguyen 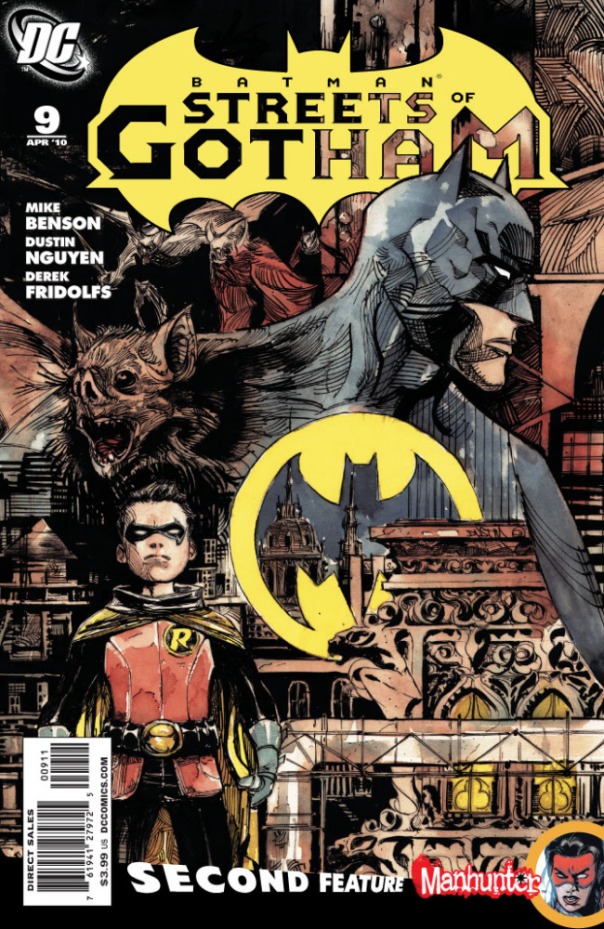 This is my bet for Alex’s next Cover of the Week. Heck, just the covers alone make me get this title every month. Not to say that the stories aren’t good too. This issue is penned by Mike Benson. For those who aren’t familiar with him; Michael Benson is a regular writer on HBO’s hit series “Entourage”. Come to think of it, he’s probably responsible for Vincent Chase as Aquaman….. Anyway, expect this issue to have the usual gorgeous artwork from Nguyen, with a strong done-in-one story. The Manhunter c0-feature ain’t too shabby either.

Next up is a personal favorite, Punisher #14; cover by Mike McKone

Bitch all you want about the plot being ridiculous and campy, cause guess what, this isn’t your usual Garth Ennis Punisher anymore. You can save the gritty realism for the Marvel MAX line. This is the 616, where people wear bright colored spandex and can come back from the dead as a badass Frankenstein monster. I thought I’d never again read a Punisher book and actually have a blast. It’s not that I don’t like the Ennis Punisher (the adult in me loves it), it’s just that the 8 year old in me thinks Franken Castle is an awesome name!

Lastly we have Joe the Barbarian #2; cover by Sean Murphy 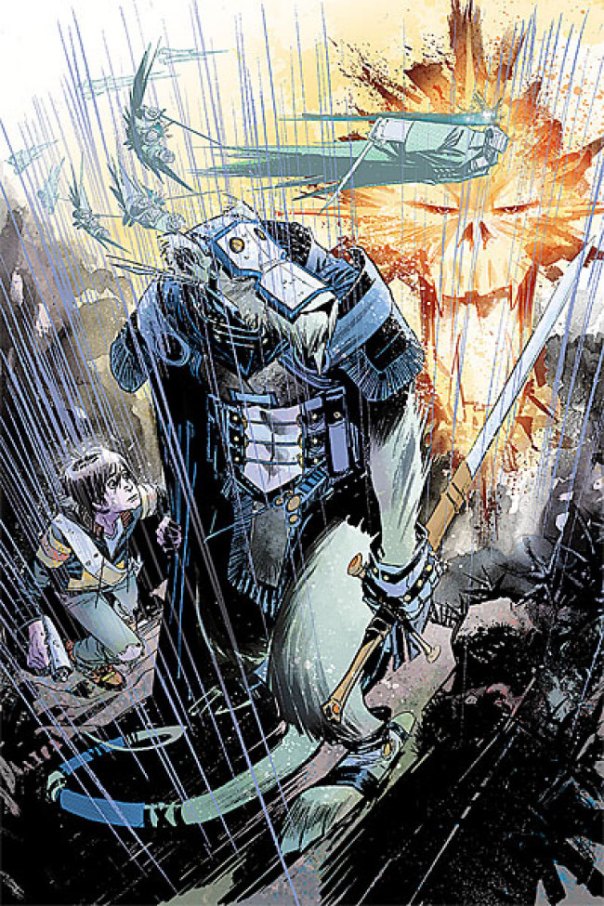 Grant Morrison and Sean Murphy. If you’re aware of who these two are, that should be enough reason to pick this up. The first issue was off to a great start, showcasing the spectacular artwork of Mr. Murphy and a more grounded Grant Morrison (as opposed to the freaky weird (albeit brilliant) version of Grant Morrison) who is one of the few comic book writers who excel at both superhero and non-superhero stories. Joe the Barbarian is a powerful piece of storytelling.

So there you have it. If you’re not already reading these titles, I hope I’ve been able to steer you towards at least taking a good long look at the cover to Streets of Gotham. See you next week. 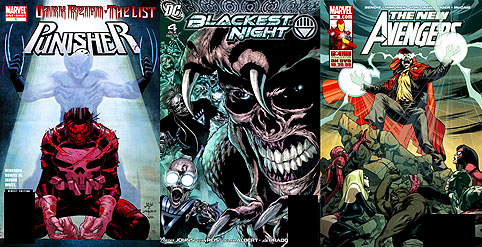 While Alex is away rallying the forces of his PINK LANTERNS (yeah, I just went there!), EJ and John are left to review the biggest books of the past couple of weeks WHILST defending against zombie hordes.  Dark Reign – The List: Punisher, Blackest Night #4, and New Avengers #58 are this week’s main reviews, and the boys discuss what real world issues could be interestingly dealt with in comics.

And the hits just keep on comin’ as Alex and John bring you reviews of the recent week’s hottest books — Punisher Annual #1, Superman: Secret Origins #1, and Giant-size Wolverine: Old Man Logan #1!  We also kick off a new segment: AUDIENCE REVIEWS, where we read your reviews of the latest comics you’ve read.  After a round of Quick Shots and War of Thumbs, the boys talk about the power of digital comic distribution.