The boys and I originally planned to do an Avatar review in one of the episodes, but everyone’s schedules just kept conflicting and hardly anyone saw the film in time.  Thankfully, my better half Jad Montenegro wrote this review on her Facebook, and I feel it encompasses all the points any of the komikeros could have possibly come up with… and then some.

I loved Avatar. And I can name a whole slew of parallelisms and analogies that some critics are probably going to whine about, including some casting flaws, but I sat through an almost 3-hour length film, counting off the themes I saw and yet I was riveted. In the end, strong filmmaking and its “formulas”, no matter how disdainful to some, still works. Cameron knew that, and every sci-fi fan (the ones that read actual books) will appreciate a good tall tale, even if it’s not the first to use a particular concept.

There are at least 5 books** I can name that have similar (and definitely earlier) concept developments, but I’m surprised to note that while it seems to be a concern in theory, it’s a completely insignificant factor in application, meaning that as I watched it I didn’t give a damn who wrote what first.

Regarding some parts of the story that inevitably many varied groups of people with obviously varied interests (and therefore foci) will find distinctly lacking in the movie (such as one friend of mine wishing more focus had been given to “dreamwalking”), the answer to that is simply: A movie cannot contain all the concepts one can think of for it, it can only hope to create a wondrous blend of them, and in the “blend” Cameron did his magic, including paying so much attention to the computer graphics that you barely care that you are inundated with it from the start.

I use casting “flaws” loosely, because one may take it different ways. A consequence of the rich and magical universe that is Pandora and the Na’vi is the resulting bland contrast the human world makes in the movie. Therefore the characters are not fully developed, and may remain “flat”, or “token”. Token nerd, token scientist, token broken hero. I forgive this, fully, for the obvious advantage it brings to the special effects and graphics department. It’s only logical to keep the backdrop bland in order for the effects to stand out, and it’s insane to keep the backdrop busy and then raise the bar even higher for complicated effects and graphics just to maintain the balance.

Jake Sully in my opinion was perfect exactly as he was as a human: unremarkable. I also disagree about his character lacking development. His human character did not, but his avatar certainly did. His matter-of-fact reaction to all the changes he undergoes isn’t a bovine lack of understanding or concern for his own well-being – it’s the logical and expected behavior of a Marine, a hardened soldier who is fazed by nothing. He’s a cripple who’s lost touch with his own humanity. That is not apathy at all. His almost instinctual assimilation of the Na’vi culture is reasonable: it’s easy to fill a cup that’s been forcibly emptied. Besides, according to my better half, people forget that Jake Sully was a TWIN. He wasn’t going to get more “un-individual” than that. He was BEGGING for an identity, and the Na’vi way of life fulfilled that need.

I’m not even going to go into the political aspects of this movie (how it’s too “green” and that it’s a direct play on the whole Bush-Iraq rape)- that’s just asinine. To judge something by your current socio-political weather isn’t very smart, considering this movie is going to be around longer than your current president.

This has been called by some the “Dances With Wolves, even Last Samurai-ish, but with 10-foot blue aliens” movie, and in a way, they’re right. But these creatures are expressive, believable, and totally relatable, the CG universe they steep you in is next to flawless as they create the moment of immersion, and that’s why it’s so much fun. You’re actually PART of a movie, not some sheepy viewer who paid to not get bored on a Saturday night. You return to that old self 3 whole hours later, when you step out of the movie house and realize, staggeringly, that these guys made all that shit UP (and there’s no way you’re going to encounter anything remotely close to that in real life…so how come it felt completely natural while you were watching?).

The notable lack of explosions right off the bat (meaning the movie didn’t start with something getting destroyed in the first 5 seconds) is something that I consider positive, as well as the intimate focus given to the ways of the alien race (almost like the viewer is being given a walkthrough), considering that our generation seems to become number and number to flashy effects-driven movies each year: the future of cinema is in the storytelling, not just the plain story, not just the plain telling. Avatar may not yet be the future, but it certainly raised the bar for everyone else.

I gave Avatar 4.5 stars out of 5 only because I saw some parts of the movie that could have used a bit more subtlety, including how 3 main characters managed to meet up at a single spot in a war that supposedly covered hundreds of miles. But aside from that, I’ve tried to keep my review and criticism rant-free. One thing that pisses me off about movie reviews that come out after a highly publicized movie is that every single smartass suddenly turns into the world’s best amateur screenwriter. “This movie sucks because this idea that I have isn’t in it.”

To again quote my better half, “Go write your own stupid movie.”

It’s the 2009 Year Ender Episode with not two… not seven… but FOUR Komikeros at the microphones.  Listen to EJ, Alex, John, and Migs recount the year’s best and worst comic moments, single issues, moments, and of course, ongoing titles.  Enough with the preamble — this episode’s jam-packed, so get to listening!

Merry Christmas and a Happy New Year to everyone!

Welcome the very first, EXTRA-SIZED installment of “Prejudged!”, where we attempt to review the week’s coming comic book releases based solely on their covers. This is raring up to be a big week in comics with titles like Green Lantern, Detective Comics, New Avengers, Chew, Fantastic Four, and the big Captain America one-shot, so let’s get to it!

First off, we have the cover of New Avengers #60 by Stuart Immonen:

For those of you who already follow this title, you’re already well aware of what’s happening in this cover.  For those of you who don’t, GET OUT NOW!  I WILL SPOIL!… Ok?  Now, we all know Luke Cage has been out of commission for the past few issues with a heart problem, i.e. the spider-like device Norman Osborn put in there.  Despite what looks like another marketing ploy by Marvel (I still love ’em though), the most affecting part of this cover is in it’s very composition of how our viewpoint allows us to share in this moment as if we ourselves where part of the team.  This is doubled by having Jessica Jones and the baby be the focal point of the cover, seeing as they’re the only ones in color. You can expect a few tears shed in this issue and probably a few guest appearances (My guess is Danny Rand). Also, it looks like Wolverine’s back.

Next, we look at the cover of Detective Comics #860 by J.H. Williams:

Man, Kate Kane’s got a huge face! Look how tiny her hands are! Dude… Despite the discrepancies in terms of character proportions, this cover actually tells a lot about the story inside the book, this being the conclusion to Batwoman’s origin story, which has her putting on the mask for the first time.  This is a striking image of a sinister looking smile on her blood red lips.  I’ve always appreciated how Rucka and Williams make Batwoman look almost frightening in her costume, not partaking in the “Let’s make all women hot” mantra in comic books.  Greg Rucka has always handled his female characters very well, and Batwoman is his most fleshed-out character to date.

A quick look at the cover of Captain America: Who Will Wield the Sheild:

I vote they split it: Steve gets it Mon-Wed-Fri, Bucky on Tues-Thurs-Sat, and then alternating Sundays.

Finally, we have the cover of Chew #7 by Rob Guillory

Call me weird, but the first thing I noticed on this cover was the rat’s monocle and the fact that it has the image on Tony Chu in it.  Aside from the obvious, this cover’s got a lot going on in it with the USDA pin to the smart-looking rat.  Plus, good use of negative space. This one’s sure to grab your attention on the shelves. Great cover.

Read the Article in it’s entirety on Migs’ site for cover reviews of Fantastic Four, Green Lantern, and The Last American Crime.

So, that’s it for this EXTRA-SIZED inaugural edition of Prejudged! Come back next week for another batch of Prejudged! comic books. 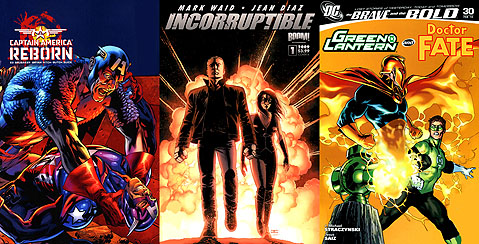 With Alex and EJ busy with the Christmas rush, John and Migs set up a table for two and review Captain America: Reborn #5, Incorruptible #1, and Brave and Bold #30.  After a round of quick shots, the boys discuss Bryan Singer back on the X-men franchise and talk about news regarding the 300 sequel.  They end the show with their ideas for inter-company superhero team-ups.  Look out, JMS!

Holy crap!  It’s the 35th episode and we’re still proud to be geeks! Alex couldn’t join the foolishness this week, but EJ and John were around to deliver the douchery.  And as if that isn’t already more than you can handle… this episode introduces the FOURTH komikero… Miguel!  Books reviewed this week include Amazing Spider-man #614, Secret Six #16, and Invincible Iron Man #21.

After a round of quick shots, we enjoy War of Thumbs… and then cap off the show with a continuation of last week’s panel discussion about Comic Fan Elitism. 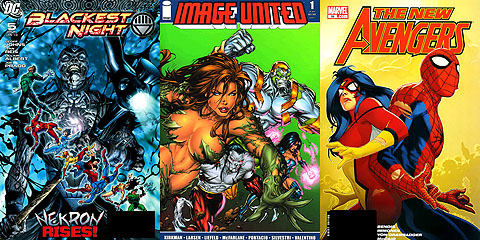 With EJ never being around when Alex is, and vice versa, John is beginning to think the other two komikeros are actually (dramatic pause) THE SAME PERSON!  Keep listening to Tres Komikeros to get to the bottom of this chilling mystery.

Oh also we read some comics: Blackest Night #5, Image United #1, and New Avengers #59.  After an audience review and a round of quick shots, the boys played a healthy game of thumb warfare.

You know who you are.